When I first started to get some “big time” voice over work in Los Angeles, it was 1982. I had stumbled into a niche, being cast as a voice on movie trailers and commercials for teen movies…Fast Times at Ridgemont High, Porky’s, Bachelor Party, All the Right Moves and several others. During the early 80’s, I did a lot of this work at a studio called Prism Recording on North Seward in Hollywood. It was in fact a little “house” set back behind a front building on the street, that had been turned into a recording studio. It was owned by Pat Prendergast (who in 1984 helped my wife buy me a Neumann U87 as a birthday gift. The same mic I still use today) When you walked in the front door of Prism Recording, you found yourself in a living room, the kitchen was to the right and the bedrooms in the back of the house were the studios. It was here that I first met some of the most amazing voice over artists in the world.

One of the most amazing and truly eclectic was Corey Burton. We were both young, about the same age and we had a lot of passion for our business but unlike me Corey was a walking treasure chest of voices. So much was inside his head and he was in such control of his vocal cords, he could hardly contain it all…sounds and voices just leaked out of him in normal conversation. It seemed to me that he could dream up anything in his head and command his vocal cords to produce that exact sound he had imagined. This was quite amazing to me because I was more of a “promo voice,” an uptempo, straight forward sort of sound. While Corey could do that as well with ease he could also do so much more with seemingly little effort at all. I learned early on that the “greats” in any field can do incredible things and make it look as if it’s so easy and so effortless. 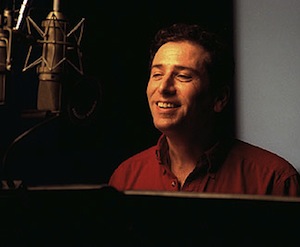 These were great times for me as I transitioned from my on-air radio career to the dream of working in voice overs full time. It was during these early years when I met Corey and Don LaFontaine, Mark Elliot, Chuck Riley, Peter Cullen, Dick Tufeld, Ernie Anderson, Danny Dark and so many other greats of voice over.

Those days of sitting on the living room couch at Prism Recording chatting with several of these greats as we all waited to go into one of the studios to record our gigs are long gone unfortunately.
Imagine if we had a video camera running during these days, but it didn’t seem so incredible while it was happening, it only reveals itself as truly special in hindsight. These days we are all in our own home studios, some are on the big studio couch in the sky, but in either case the simple truth is…we don’t get to see each other much and interact in such a way.

Flash forward to 2010 now. When I decided I wanted to have an intro to the video page on my website, I thought “how cool would it be to have the old NBC bumper…”the following program is brought to you in Living Color on NBC” as the intro. But I wanted to actually recreate it somehow….find the music bed or frankenstein it together (which my web designer Tom Anthony did). I thought of recording the voice over myself, but then decided if we’re gonna do it, we really should do it right….which meant Corey Burton. Besides his incredible talent for animation voices, Corey has a great respect for the announcers of a by-gone era. The voices he grew up with coming out of his living room TV, the same voices I grew up with.

Here is the video

If it were 1982, I would ask Corey for a favor while we were hanging around at Prism Recording one day, but we’re nearly two decades past that. So, I asked him in an email and apologized for the written imposition. I haven’t seen Corey in about 10 years, but I hear him on my radio, my television and my computer all the time. We have the same agents as well.

Corey wrote back immediately and said he would LOVE to do it for me. In fact in his inimitable style said, “Lovely hearing from you anytime! I’m flattered that you’d ask me to take part in this retro-cool “button” piece, and I would consider it a real honor.”

How cool is THAT. And then he went on, as only Corey Burton can…he is a perfectionist when it comes to recreating “sound”

“It would be a pleasure to record and play around with a handful of variations in tone and delivery to find the best note to both emulate and slightly send-up the old peacock logo VO. I know I can’t match the classic guy’s sound with total accuracy, but with my old RCA Ribbon and a few distortion/EQ tricks it should sound close enough to seem authentic.”

Again, I say…how COOL IS THAT!

What I received were about 30 takes on the written line with copy variations and the most precise recreation of a classic “sound” that just made my jaw drop. How did he do it? Well besides his remarkable talent and being a student of the classic announcer genre, he explained to me:

“I couldn’t help but try to mimic the classic track as precisely as my little voice can manage; having grown up hearing it played every half hour continuously during my formative years have etched it permanently into sonic memory snapshot, and it sounds so “wrong” to me if a microsecond of that familiar musical phrase falls out of place! Of course that obsession is what made me want to do this for a living in the first place – I know all of us share that kind of endless fascination with the Great Voices that made us light up with excitement as kids. So I recorded a bunch of takes – all very similar, of course – using my Zephyr set at G722 to flavor the sound with that old analog network land line coloration, and EQ’d it with a little more limiter added, for good measure.”

All this from just asking for a “favor.”

This all goes to point out the fact that we all ask friends and acquaintances from time to time for a “favor.” Can you pick up my newspapers while I’m out of town? “If you’re going to the market, can you get some butter?” And how many times have we all been asked to do a favor for a friend and of course we do it, but most times without much effort put into it. It’s just a favor after all.

When someone puts this kind of thought, effort and attention into a “favor” it leaves one in awe. It’s when a gift like this comes my way, I have a clear understanding of how thankful I am for the good fortune I’ve had in my life, my career and in the quality of the people I’ve met along the way.

That’s the sentiment behind these two simple words. “Thanks Corey.”