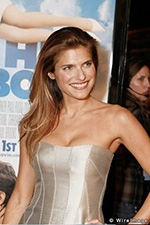 Lake Bell has completed the shooting schedule of a feature film called “In A World.” She’s directing and acting in the film, which is about the world of voice-over artists. Lake didn’t want to reveal too much about the movie. “I’m not going to say who’s in it yet, but it’s ridiculous, like, the comedy elite. Let’s just say I made some phone calls.” She did, however, explain the movie’s premise. “When I first came to Hollywood, I was sure I was going to be one of the world’s greatest voice-over artists. I was really good at accents, so I figured I come out here and make a ton of money. It didn’t happen. She has done a few voice-over parts, such as the witch in Shrek 4. But at the present juncture, she’s speeding down the super-highway of feature films and not looking back.

Lake auditioned scores of actual voice over artists to add a touch of realism to her feature. One of the “real” voice over actors appearing in the film is (Fox, CBS, Deal or No Deal) voice-star, Joe Cipriano.